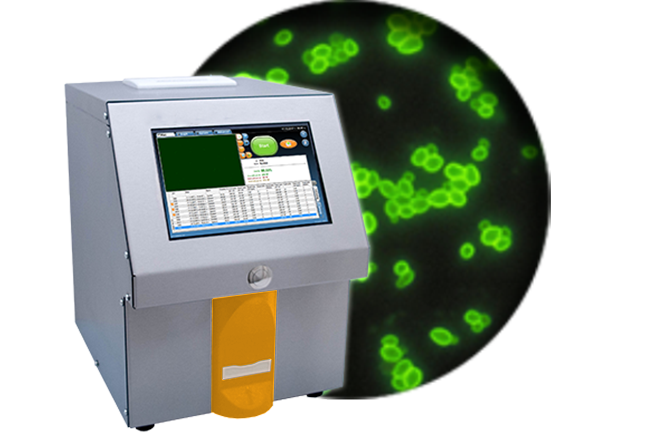 EASYCOUNTER YC enables the user to obtain a total number of yeast cells and determine the viability of the yeast in the sample.The system considers individual cells in suspension using image cytometry.

EASYCOUNTER YC counts the individual cells into suspension by detecting the fluorescent signals of stained DNA in the cell nuclei with SOFIA GREEN fluorescent dye. The cell membrane of viable cells is practically impermeable to SOFIA GREEN, whereas non-viable, dead and, to some extent, apoptotic cells are permeable to the dye. Thus staining with SOFIA GREEN on a sample of the cell suspension gives results on the number of non-viable cells in the sample. Determining the total number of cells requires membranes of viable cells to become permeable for SOFIA GREEN. This is achieved by mixing a cell suspension with a lysing reagent and SOFIA GREEN dye previously dried into a microcentrifuge.

The lysing reagent penetrates the cell walls, thus enabling all the cells in the suspension to stain. 8 μL of the ready sample with all stainihg cells is required to be pipetted directly in a camera A or camera C of single CELLCHIP. The other 8 μL from the sample with only dead stained cells is required to be pipetted in camera B or camera D of the same CELLCHIP. Then the chip is loaded into the image cytometer. The analysis takes place over a period of 10 seconds to 2 minutes, the length of which depends on the number of fields captured. The EASYCOUNTER YC system automatically focuses on the chip and the colored cells are captured by the sensitive CMOS camera. The algorithm for digital imaging analysis determines the number of fluorescent cells and calculates their concentration, size and viability. The result is automatically displayed on the screen.


Other downloads for this product: