Coefficient of Variation for Yeast counter

EASYCOUNTER YC - total, vital, viable, dead yeast cell counter makes 16 pictures of different areas, for each of the four chambers of CELLCHIP. Device makes a total of 64 images for four chambers, 32 for each test (more than any other instrument on the market). This possibility of device results in higher accuracy of cell count and low coefficient of variations. Our instrument is capable of doing this because of its unique, 3D, multi-image, sequential scanning process in which the CELLCHIP is moved in x and y axis by the internal mechanism. This original mechanism is protected by patent application. 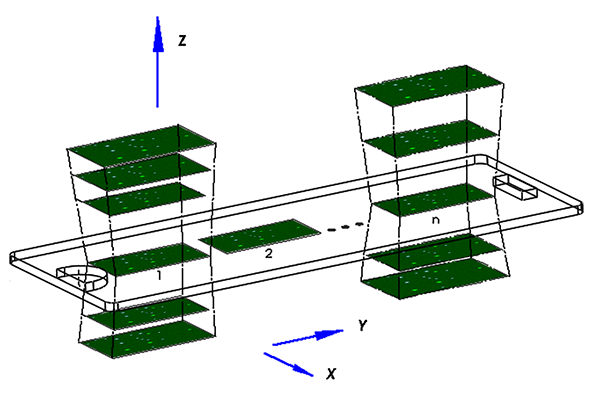 In this way, more than 43 mm2 is used to capture the images. After capturing, the images are being processed by the embedded software and the average result, calculated by using the formula from ISO 4833, of all the filmed images is displayed. The whole process, after placing the CELLCHIP in the cartridge, is fully automated.

Another advantage of the instrument is the use of a large volume of the stained sample, piped into the channel of the chip, which also helps to achieve low values of the coefficients of variation.

The correct dilution of sample

It is known that the accuracy of the assay depends very much on the dilution rate of the starting sample. For the device EASYCOUNTER YC, the most suitable cell concentration to determine the cells count is in the range of 1.105 to 1.107 cells/mL. It can be seen from the table that the coefficients of variation in the cells count are the lowest in this interval.

By knowing that we have developed special guidelines and dilution scheme to achieve optimal concentrations of cells for accurately determination of total cell count and dead cell count (100x103 – 10 000x103 cells/ml).

The 2 chamber method of counting cells

Other advantage of using 2 chambers is the increased test volume - 8µL for total cell count and 8µL for dead or vital cell count. In this case the total volume tested is 16µL and this increases the results accuracy.

The two chamber method allows using the same dye in both chambers. This completely removes the danger of interference of two dyes, as well as light pollution problem which appears usually when using one chamber, as used by our competitors. A great advantage is the low cost of our consumables, because we synthesize the dye in our laboratory.

For better understanding the advantages of the two chamber method, we apply some examples for determination of cell viability:

The results obtained are detailed in the following table and comparison with results of 1 chamber method and with DMCC. Using the dilutions, we can calculate the total and dead cells per mL in each chamber:

Here is a second example, for better understanding. This time with different dilution and using the lower dilution rate of the dead cells for the total cells in the one chamber counting method.

The end results for this example are shown in the table above. Using the dilutions, we can calculate the cells per mL of the yeast suspension that was counted in each chamber:

Assuming all this information, the using of the EASYCOUNTER YC is much better because:

> Large counting area 43mm2 *
> The tested volume is 2 times larger (5µL for the total cell count and 5µL for the dead cell count, total - 10µL *)
> Lowest price per test, because used one dye (SOFIA GREEN), which is synthesized in our laboratory.
> The best results guaranteed by the use of lysing reagent for the total cell count.
> The two chambers utilize 2 different dilutions, making the cells per mL in the optimal concentration interval for the EASYCOUNTER YC.

*when using instrument in reference mode