The most important tool for a brewer is the viability cell count. 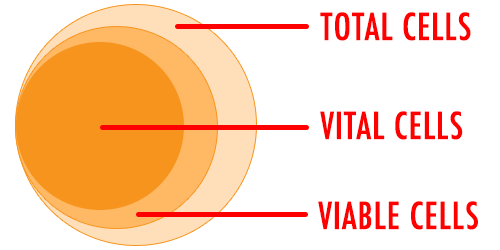 
EASYCOUNTER YC is based on a fluorescence microscopic cell counting technique. Due to the fluorescent dye, LED optics, and CMOS capture technologies, cell analysis is accurate, reliable, and fast.

The system enables the user to obtain a total number of yeast cells and determine the viability of the yeast in the sample. The system considers individual cells in suspension using imaging technology.

EASYCOUNTER YC takes the individual cells into suspension by detecting the fluorescent signals of stained DNA in the cell nuclei. The fluorescent dye used is SOFIA GREEN. The cell membrane of viable cells is practically impermeable to SOFIA GREEN, whereas non-viable, dead and, to some extent, apoptotic cells are permeable to the dye. Thus staining with SOFIA GREEN on a sample of the cell suspension gives results on the number of non-viable cells in the sample. Determining the total number of cells requires membranes of viable cells to become permeable for SOFIA GREEN. This is achieved by mixing a cell suspension with a lysing reagent and SOFIA GREEN dye previously lyophilized into a microcentrifuge. The lysing reagent penetrates the cell walls, thus enabling all the cells in the suspension to stain. 8 μL of the ready sample with all stainihg cells is required to be pipetted directly in a camera A of single CELLCHIP. The other 8 μL from the sample with only dead stained cells is required to be pipetted in camera B of the same CELLCHIP. Then the chip is loaded into the appliance. The analysis takes place over a period of 10 seconds to 2 minutes, the length of which depends on the number of fields captured. The EASYCOUNTER YC system automatically focuses on the chip and the colored cells are captured by the sensitive CMOS camera. The algorithm for digital imaging analysis determines the number of fluorescent cells and calculates their concentration, size and viability. The result is automatically displayed on the screen.


In many cases, toxic effects of chemical or physical factors do not lead directly to cell death. Such factors may cause a number of morphological, intracellular, or metabolic alterations that will result in the inability of a cell to divide, yet the cell itself may still be alive. The method for assessing cell viability provide information only on alive and dead cells in the whole population, but do not provide information about the number of vitality cells. In this aspect, cell vitality defining the physiological capabilities of the cell is a very important parameter. Measurement of cell vitality is advisable for conducting effective control of the fermentation process at a significant concentration of inhibitory substances that are produced during the process. It is very important for controlling the metabolic activity of yeast cells in fermentation in the brewing industry, in the production of bioethanol, in the bakery industry, etc. The Yeast Vitality Method is based on the determination of the enzyme esterase activity by means of the esterase substrate 5-carboxyfluorescein diacetate (CFDA). In parallel with this analysis, it is important to determine the total number of cells in the yeast suspension. This can be achieved by using the Sofia-Green fluorescent dye, which only stains the dead cells. To determine the total number of cells, it is necessary to treat the cells so that the membrane of the living cells becomes permeable to Sofia- Green. This is achieved by mixing the cell suspension with a lysis reagent for 10 minutes. The combination of these two analyzes results in an effective fermentation control and an increase in the yield and quality of the bio product obtained.

The 5-carboxyfluorescein diacetate (CFDA) esterase substrate is used to determine the vitality of yeast. CFDA penetrates the cell membranes of living cells, the diacetate groups are cleaved from non-specific esterases and a fluorescent, charged substrate form (carboxyfluorescein) is obtained that stains the cells in green and flows out of the cells very slowly. In parallel, in a separate sample with yeast cell suspension, the total number of yeast cells was determined using the fluorescent dye Sofia Green. To determine the total number of cells, it is necessary for the membrane of living cells to become permeable to Sofia Green. This is achieved by mixing the cell suspension with a lysis reagent for 10 minutes. Sofia Green penetrates through damaged cell membranes, binds to core nucleus, and cells with damaged membranes turn green.